The last time I cycled on the Bristol and Bath Bike Path must have been in 1987 when I was a student living in Bath. The path has been upgraded considerably in the last 26 years and it is now fully tarmacked whereas when I used it previously it was mainly a loose surface and only tarmacked at the Bristol end from the tunnel onwards.

The first challenge was actually getting the bike to Bristol as the train we selected was only half the length that it should have been, 4 carriages instead of 8, and this meant that a lot of people had to stand. When we boarded the train at Taunton the luggage racks were full and we could not even move down the train with our folded Bromptons as the aisles were full of standing passengers. As chance would have it we were next to the 1st class carriage so I thought I'd check if there were any empty seats and luckily there were 2 (but in different parts of the carriage) so we sat down in the knowledge that there would be a £5 per seat "weekend first" upgrade fee.   Amazingly no one came to check tickets during the 25 minute trip to Bristol Temple meads so we at least did not have to pay extra simply to get a seat. Once we arrived at Temple meads it was decided that a half pint each of a Cotleigh porter beer at the Knight's Templar pub would be a good idea after the less than ideal Brompton train experience, in preparation for the 16 mile bike path to Bath. Just next to the Station was a "Brompton Dock" where you can rent a Brompton for either £2.50 per day of £5 per day (dependant on membership type), but luckily this handy facility was not required on this occasion. The Path The start of the path is quite easy to find, as it's just across the river at the side of the station, along a road called "chimney steps" and there is even a new steel bridge leading to the start. The path follows the course of an old railway, but there are a few bits where is deviates from the course.   After a couple of minutes on the actual path, the path sort of leads onto an industrial estate, and you are suddenly diverted onto the side of the busy St Philips Causeway dual carriageway.   This soon diverts through the grounds of some tower blocks at Lawrence Hill before rejoining the railway path again. Over the next 2 to 3 miles the path gradually heads north east towards Fishponds with a slight uphill incline.   There is a tunnel at this point and you can feel the temperature drop as you enter the tunnel, it's about 400 long. It looks like the siston hill roundabout was built in such a way that it interrupted the course of the path, as the path diverts around the roundabout using bridges across the busy ring road. It then heads south towards the A431 Bath Road, and there is a steam railway visitor centre next to this road. This picture shows one of the steam trains. 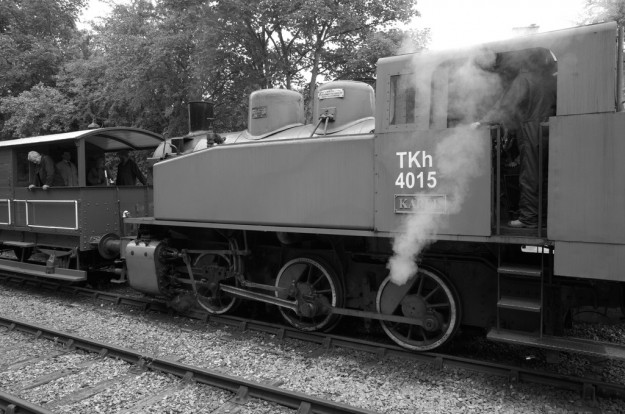 We were actually "racing" a steam train at one point but they go pretty fast. The path then gets more rural as it heads to Bath, and crosses the river avon an amazing 4 times before reaching Bath. Once it gets to the Bath suburbs it suddenly stops at Brassmill Lane and for about a half mile there is a "gap" where you have to cycle along a normal road (not much traffic luckily) and the  it continues along the riverside till it reaches central Bath, and Bath Spa station. The riverside path is quite narrow at places, but beats mixing with city centre traffic. At the end of the path is Southgate shopping centre and we had a beer & pizza at Pizza Express. 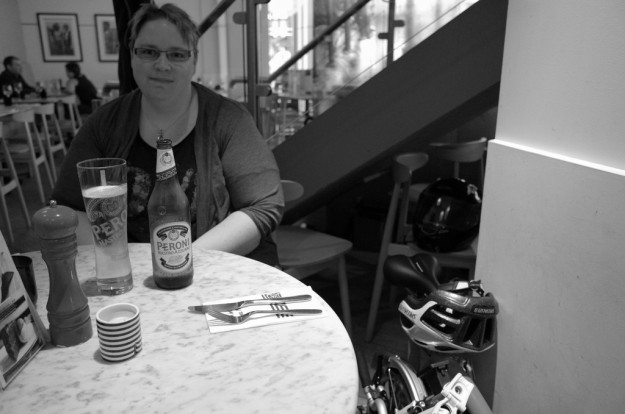 They found us a table with plenty of space for the Bromptons.  The table was near the bit where the staff hang out so I'd probably sit nearer the window if I went there again, but the pizza seemed pretty good. 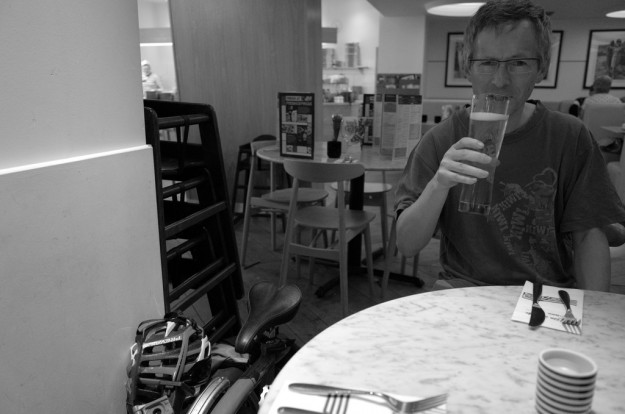 We got a 1 way ticket back to Temple Meads from Bath Spa, and the train was pretty packed, so we did the "weekend first" and yet again did not get asked for tickets, so no upgrade fee was payable luckily.     The lady next to us was complaining at great length to the guard that she pays £1000's per year for a 1st class season ticket as she runs a jewellery business so has to travel to London often, but she is fed up with people sitting in 1st class who only have 2nd class tickets! Luckily I think her complaint was aimed at the noisy group of football fans behind her rather than us. Anyway, once we got to Temple Meads the train almost totally emptied its load of passengers (mainly football fans I think) so we move the Bromptons and ourselves to the 2nd class section of the train, mainly to avoid an upgrade fee, which is not really worth paying if standard class is almost empty! Here you can just about see one of the Bromptons which fits nicely between the seats, although this only really works if the train has some empty seats as people would get annoyed if they had to stand if the only spare seats were occupied with Brompton bikes. 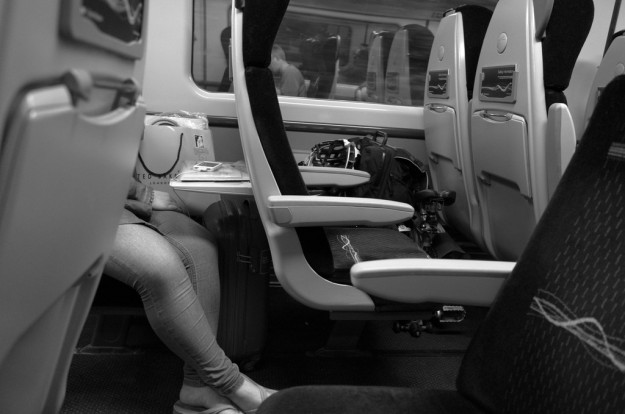